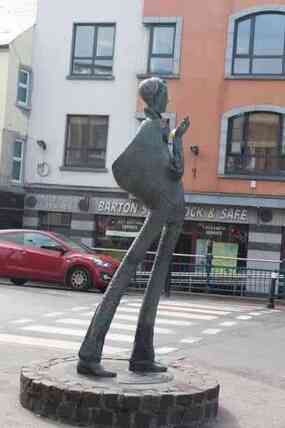 One of the pleasures of visiting Ireland is being on the trail of so many famous writers. Sligo, in the northwestern corner, is W.B. Yeats country. He often stayed there with his grandparents, and evidently he and his brother were both inspired by the river that winds through the town. On a bright, sunny day, I felt inspired there myself!

The exhibit in the Yeats Building Visitors Centre gave a brief introduction. We were given a cheerful tour by someone who had met Yeats’ brother Jack as a young boy and had been impressed by the man’s kindness. At 52, W.B. Yeats finally married—a woman who was 25. They were both interested in mediums and the hunt for the spiritual world. Yeats also wrote plays and started Abbey Theatre, but he’s most remembered today for his poetry.

The famous poet traveled widely, smartly spending winters in the south of France and Rapallo, Italy, but he wanted to be buried a few miles up the round at Drumcliff, where his grandfather had been the rector. Usually I don’t flock to cemeteries, but this one, as soon as the buses of tourists leave, has a quiet peace. The tombstone reads: “Cast a cold eye on life, on death, horseman, pass by.” In other words, you can’t expect a perfect life, and in the end, life just goes on without you. (Hm, not sure that’s comforting.) And in the church courtyard is a commemorative statue and the Yeats’ poem that ends: “Tread softly because you tread on my dreams.”

In the National Library in Dublin there was an especially comprehensive and useful exhibit on Yeats—although it ignored his famous brother Jack. It gave short videos explaining different aspects of Yeats’ life: politics, the spiritual world, theatre, romance. At the exhibit I also heard the famous words written (and spoken) by W.H. Auden: “Earth, receive an honored guest: W.B. Yeats is laid to rest.”

On a side note, I very much like the early work of Jack Yeats. His father was a painter too, who did portraits (and died in NYC!), but Jack’s early work is very Impressionistic. For the most part his later work is a little too bold for me. I went to Sligo to see the museum that owns a big collection of his paintings; disappointingly, The Model had ONE on display! Instead the museum featured modern exhibits that were of limited interest. (Thus I had the chance to enjoy a long walk along the river instead; it was a favorite haunt of the boys.) In terms of painting I had to content myself with The National Gallery in Dublin, which has a good selection of Jack’s work. My favorite: “The White Horse.” The animal seems to be an optimistic spirit horse leading us into a new world, the one we choose as we firmly ride ahead into our futures.

But Ireland is full of unexpected pleasures. A few days later I was walking around Waterford, just dallying around in the center of town, when I saw one of the wall plaques that are used throughout the country to commemorate famous people or sometimes events. The words Raymond Chandler jumped out at me and stopped me right in my tracks (luckily, no one was ahead of me or behind me!). In the quiet town of Waterford, Chandler had spent childhood summers with his uncle. I didn’t even know he was of Irish descent! (He was born in Chicago, but his mother was Irish.) The plaque is on the unassuming Peter Street, right around from the church, right above the “Viking triangle”—the trio of sights that best represents the town’s Viking history.

So I have to ask: What did Chandler experience here that shaped his thinking? Did the cool, damp weather set the stage for some of his crime writing in Southern California? No
answers to that. But the man at the Portree Guesthouse, who was from Croatia, insists that the town is a friendly one, and he has felt welcomed here. Everyone I met was helpful and cheerful (after all, it wasn’t raining). The late 1800s would have been a different experience, but one thing is certain: Chandler would have spent time among a population who loves to talk and tell stories. That must have helped shape his literary worlds.