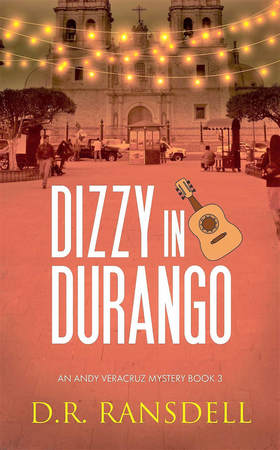 Andy travels to Mexico to visit Rachel and her relatives, but after a fellow traveler disappears, the jobless musician can’t concentrate on vacationing. When he tries to investigate, instead of finding one woman, he loses another! Before he can discover more about the women’s connection, he’s saddled with two children who aren’t his, an angry would-be girlfriend, and a self-appointed younger brother who is more reckless than he is. No wonder he starts seeing double! But what will he do when the children won’t stop hollering?

D.R. reads from Chapter One.
Interviews: (above)

Goodreads reviews for Dizzy in Durango

My original publishers at Oak Tree Press were so swamped at the time they first produced copies of DIZZY IN DURANGO that they had made a spelling mistake on the cover in one of the ONLY places I hadn't double-checked. I was devastated to have 200 copies of my new book only to be too embarrassed to sell them. (Okay, I eventually did; friends convinced me they will be collectors' items about a hundred years from now.) I was depressed for a week until I finally came up with a minor solution. I needed to have some fun with this problem since I was stuck with it. And so, since I AM a writing teacher, I decided to have a contest in my class to see who could catch the proofreading error more quickly. I promised the students many thanks--and a free copy of the book. I got eight friendly participants to participate in the contest. Two shy students offered to be the photographers instead!

Even with hints it took the students about three minutes to find the problem, but we all had a lot of fun in the process. For all future books, I will edit even more carefully!