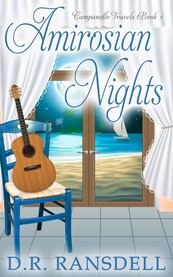 
Rachel Campanello takes a break from her mariachi band in Tucson to travel to Amiros for a relaxing Greek vacation. She’s fallen in love with the sounds of the bouzouki and the mystery of a language she doesn’t know. Between laps in the Mediterranean and evenings at the taverna, she expects to find inspiration for her own songwriting. The summer is no vacation for the islanders, however. When the musicians threaten a strike, how can she still enjoy their tunes?

NOTE: This is the 2018 edition. The book was previously published in 2003, so that was way before ebooks--and euros! This version has been updated.