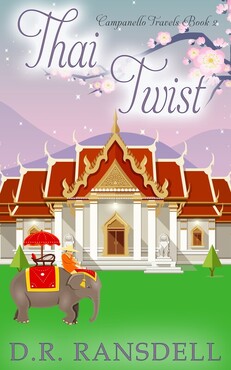 Author in Chiang Mai back in the day

An elephant statue, a long-lost relative, and a charming native add up to a chase through Thailand!

Gina Campanello is delighted to learn that she’s won a trip for two to Thailand, but there’s a catch. Since she’s underage, she has to bring an adult. Her sister Rachel is ecstatic at the prospects of traveling to Asia, but she buys so many guidebooks that Gina worries she’ll spend her whole vacation being dragged between temples and museums. Once neighbors ask Gina to deliver a package to a long-lost relative, however, she embarks on a more personal journey—one that includes forgotten histories, beautiful beaches, jealous rivals—and one handsome native.