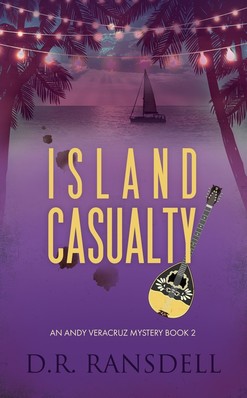 (Where better to read Island Casualty than on a boat in Greece!)

An island intrigue, a lost engagement ring, and a midnight chase sabotage a vacation!

When Andy Veracruz flies to Greece for a holiday with Rachel, the California native expects to spend afternoons swimming and nights making love. After all his troubles in Mariachi Meddler, he deserves a break! But at an outdoor café, he meets a fellow traveler who accidentally leaves behind a package. Before Andy can return it, the man disappears.

Andy tries to enjoy the rest of his vacation, but he starts doing undercover work in a bouzouki band. Soon he realizes that he’s not safe anywhere on the island. While he’s around, his friends aren’t safe either! He vows not to take any more vacations, but how can he uncover the truth long enough to make his escape?

"This is the first book that has so thoroughly sucked me in that I felt like everything was real. Even the conversations were genuine, especially between Rachel and Andy. In real life men and women often have a way of talking to each other where they aren't really understanding each other, it can be difficult to communicate and so much gets left unsaid. That is how this book is. It isn't phony, where everyone says the right things, makes grand romantic gestures and lives happily ever after."

Reviews from Goodreads.com
Audio file for Chapter 1
CHAPTER ONE

By the time I woke up, it was so hot I assumed I’d slept until afternoon. I couldn’t check because I didn’t remember where I’d left my watch. Vaguely I recalled that Rachel had shut the window soon after sunrise to capture the night’s relief, but by now the sultry Aegean breeze was preferable to the room’s dead air.
I opened the window onto the Greek island paradise and then ignored the view. I sprawled on the bed, remembering my quasi-confession from hours earlier. I’d told Rachel, a woman I’d barely met, more than anyone should have known. My brother and my neighbor knew the story, but they’d gotten it in bits and pieces as it occurred and helped me think it through. Rachel had gotten a deluge.
Still I felt relieved. The worst part was that Louloudi, as I’d come to think of her, had been imbued in every aspect of my world. Her tragedy involved my fellow musicians, my boss, my apartment, and my brother, who’d been dragged into the mess without a choice. For the past weeks my every thought had been governed by her memory.
Downstairs Eleni’s young sons shouted at one another as they raced around the house. My hostess asked them to be quieter, and for a moment they obeyed. I stalled, hesitant to join my new friends. They’d invited me into their home on the gut feeling that I was at least all right, but they would see me differently now. I’d been too honest.
I wandered down to a crowded kitchen where Eleni and her husband Nikos sat reading a newspaper at a wooden table while Rachel dried dishes in front of a window overlooking the house next door. As soon as they heard my footsteps, all three looked up. While I hadn’t expected a welcoming committee, neither did I expect stony faces. I was trapped, wondering what the hell Rachel had told them and why the hell she’d told them so much.
“Kaliméra,” I said quietly. Good afternoon. That was half the Greek I’d learned on the plane ride from L.A. When Rachel explained that most of the townspeople spoke some English, I’d taken her word for it.
“Coffee, Andy?” Rachel asked.
I nodded, venturing further into the room. “I’m sorry if I slept too long. I hope I haven’t held up anybody’s plans.”
The silence engulfed me.
Finally Eleni indicated the empty chair at the table. “Andy, please sit.”
I wasn’t evil. I’d merely withheld information. I wanted them to know that. Rachel had invited me to visit when we’d met in Squid Bay, a beach town south of Los Angeles, a couple of months before. She hadn’t stipulated that I was supposed to be coming as a boyfriend and therefore should be emotionally free. It wasn’t my fault that I couldn’t get Louloudi out of my head; I certainly didn’t want her there. Neither had I come to the Greek island of Amiros under false pretenses. I had thoroughly expected my initial attraction to Rachel to be followed by an intimate physical relationship. Unfortunately, most of us don’t choose our emotions. They choose us, and no matter how uninvited they may be, we have to figure out a way to deal with them.
I sat down, facing my inquisitors.
“Rachel?” Eleni shook her head, concentrating on the contents of the sink.
“I can’t do it either,” Rachel said.
The silence screamed.
“Andy, there is no good way to tell you.” Nikos slid the day’s copy of The Amirosian, the island’s tourist publication, before me.
I didn’t have to ask what to read. The headline proclaimed: “Athenian Man, 39, Pulled from Harbor.” The picture showed the lifeless body of a drowned man whom I’d befriended the day before. I’d spent the previous evening looking for him among the harbor cafés. No wonder Rachel and I hadn’t found him anywhere.
His name was Haridemos Kalamaras. I fingered his fiancée’s engagement ring, which was still in my pocket.
Nikos ran his hands through his bush of unruly black hair as if for inspiration. “I know it’s hard to get such news first thing of a morning.”
As Rachel handed me a cup of coffee, I was aware that the three of them were equally concerned, not about the dead man, but about how I would take his demise.
“I don’t know what to say.” I hoped that the relief I felt at not having angered my new friends with my senseless babble about personal tragedy didn’t mean I was callous deep inside. “You never think that a person you meet one day will be dead the next.”
“Thirty-nine,” Nikos said. “He was only ten years older than me.”
“I’m exactly his age,” I said.
That made him much too young to die.